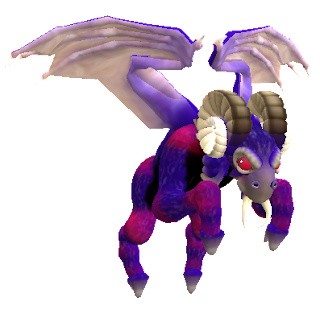 Rampires are abhorrent nocturnal creatures that nest in caves and Ancient ruins.  Although similar in size and build to their ancestor species, they sport bat-like wings and prominent fangs.  Weeping wounds cover their bodies, staining their shaggy bluish fur with blood.

To compensate for their continual blood loss, rampires have a gluttonous need to replenish it...by draining it from living victims.  A successful bite from a rampire injects a Class 11 paralytic toxin, and then the creature clamps down with its fangs, doing an additional 1d6 drain damage per subsequent round while guzzling the lifeblood.  They Dive when attacking by air (but can only carry off child-sized or smaller targets), and Charge when on the ground.

Those that suffer a bite from a rampire must make a Saving Throw Versus Poison, or acquire the Hemophilia Physical Mutation Drawback themselves.

Hushed rumors claim that rampires not only interact with (if not outright control and command) groatches, night goats [see p. 86 of the Mutant Future Core Rules], carnivorous sheep [p. 94], and spidergoats [p. 98], but also freely interbreed.  The specific natures and appearances of these terryifying hybrids are, if they exist at all, unknown. 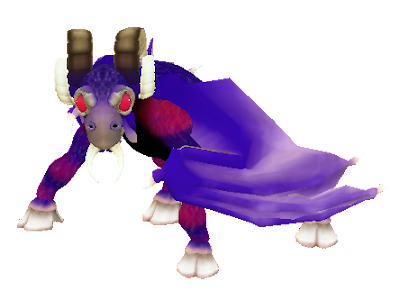